If you were a supporter of the Lewisville-Clemmons Road project during the 2017 council election, you are probably thinking that former councilpersons Mary Cameron, Mike Rogers, and Lanny Farmer were turned out of office for a plan that ended up being a  reasonable and measured response to the traffic issues on Lewisville-Clemmons Road. You may also be thinking that how they characterized their 2016 votes on the issue – that they were simply keeping an open mind and that they reserved the right to reject the NCDOT’s plan – has been entirely vindicated by the plan and process outlined by NCDOT on May 15. I know I am.

It would be natural to blame the slate of candidates that ran under the Stop The Median banner for the actions of the PAC that supported them and to subject them to the same vitriol and abuse that those they defeated had to endure; however, I urge you to reject that base instinct. Clemmons stands at a crossroads and we need our Village Council to be successful. We may not agree with them on everything, but the new mayor and councilpersons are sincere in their desire make Clemmons a better place, and they seem to be keeping an open mind about the issues they confront.

Try to play a constructive part in the deliberations over the L-C Road corridor. Reach out to your councilpersons and get to know them. Lend them whatever expertise you have to offer. In due course of time, they will be called to account for their statements and associations during the 2017 campaign, but the time for that accounting is not now. Davie County is busily building out infrastructure that will exert a strong gravitational pull on potential new residents and our tax base (Exhibit A – I understand former Mayor Nelson moved across the river as soon as his term was up). My friends, we must hang together or we will surely hang separately.

If you’re a L-C Road project supporter and you really feel the need for an accounting now, I have a suggestion. Reach out to the Clemmons businesses that funded and supported Stop The Median and let them know that you expect them to play a constructive part in planning L-C Road improvements with the Village and NCDOT. Let them know that if they ever put their parochial interests ahead of your family’s safety and well-being again, they will lose your business and your political support – permanently. The businesses of Clemmons are here to serve the people of Clemmons. We are not here to serve them.

Below you’ll find a list of the special interests that backed the ironically named Clemmons Citizens Want a Voice PAC as well as the pre-election advertisement in which some area businesses sided against the safety of the traveling public. You can find the detailed financial disclosures for the PAC here. If you need somewhere to place your ire, place it where it will do some good by letting them hear from you … politely but firmly.

I welcome your comments below. 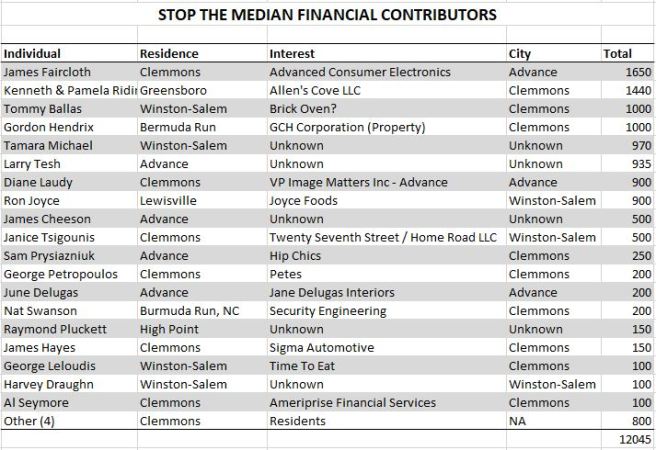 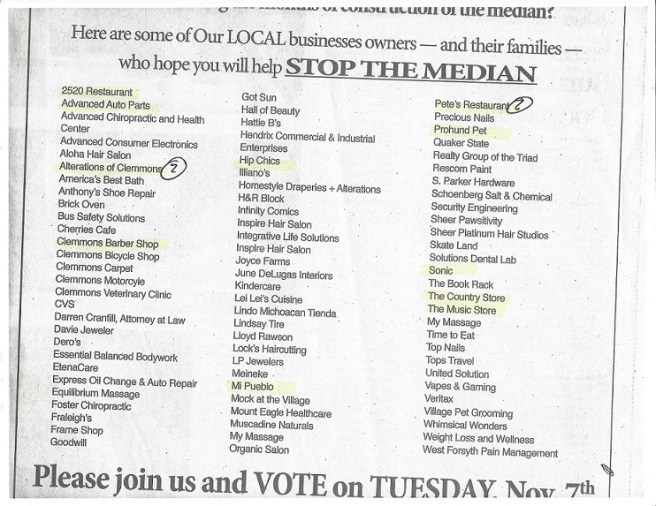